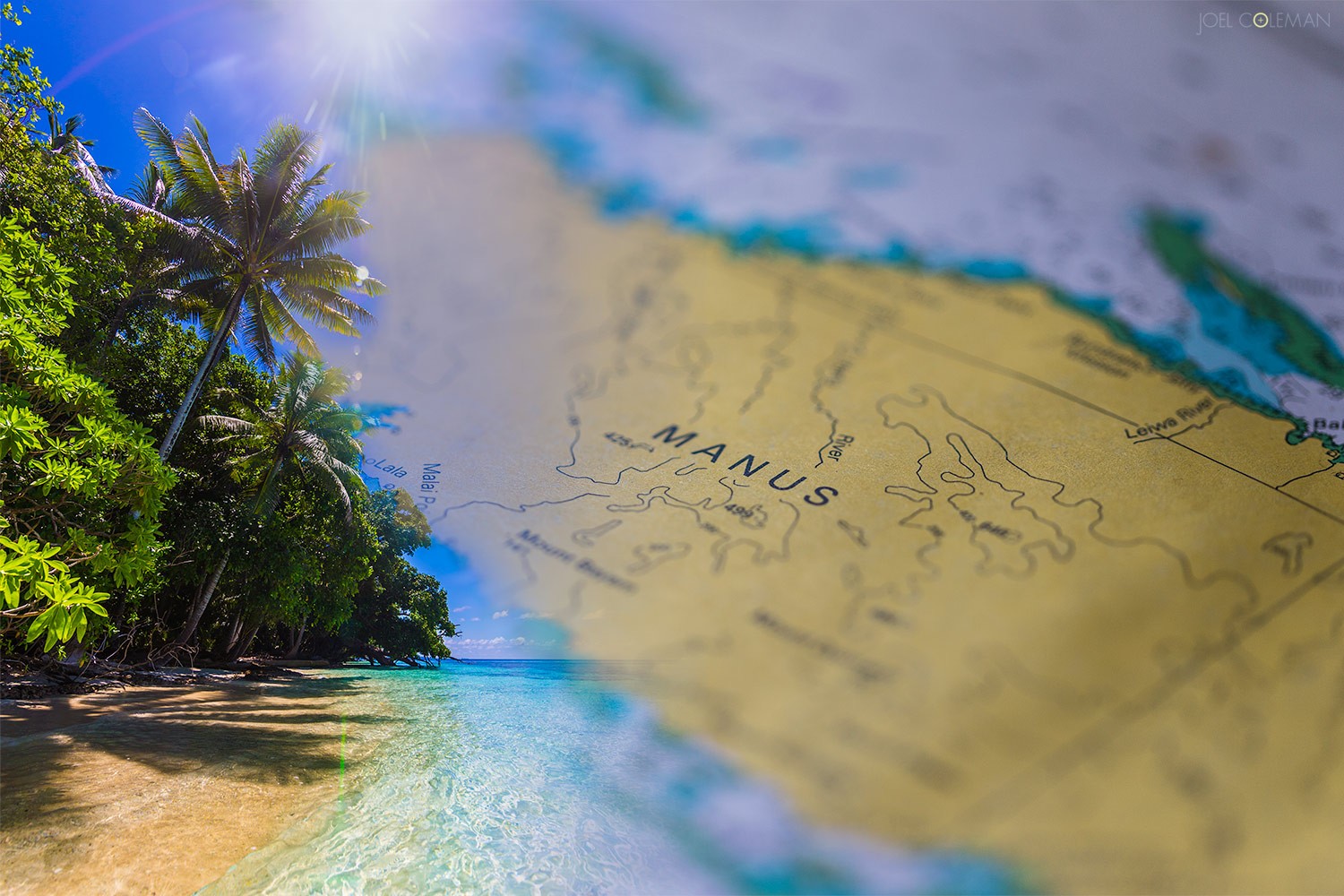 There’s an old copy of the Papua New Guinea Lonely Planet guide sitting outdated, dog-eared and tattered next to me. The opening line of the introduction reads ‘PNG is the last frontier for travellers’. The book runs through the usual list of history, climate and other generally dry and totally uninteresting facts, the photographs are bland and the ‘things to do’ list reads like a bad high-school excursion. If you were looking for a place to go and decided to consult the Lonely Planet guidebook, I am pretty sure you would not end up in PNG – your loss. If following guidebooks is your thing, then go enjoy the ‘loneliness’ of Kuta Beach in Bali. If however, you are interested in finding paradise, read on…

In 1998 I was living on Lorde Howe Island, one of the most beautiful places in the world. I was fresh out of high school and working as a dive instructor. The captain of the dive boat told me about the time he had spent in PNG with the legendry Jean Michel Cousteau (son of Jacques) sometime in the 80’s. He spoke of some of the most incredible diving in the world, amazing tropical locations and friendly people. His descriptions of Manus Province sounded like he had found paradise. I promised myself that one-day I would get to Manus. It took 16 years, but it was worth the wait and certainly a lot better than what the guidebooks made out.  Surfing, is what took me to Manus, no surprise there, it takes me pretty much everywhere.

Perspective is defined as: “A particular attitude towards or way of regarding something; a point of view.” Most people’s perspective of Manus Island, PNG is what is fed to them through the media. Very few (I’d hedge a bet and say virtually no) tourists go there as very little infrastructure exists to entice them. But surfers have a different perspective on the world. If there is a wave worth surfing, it’s is a place worth visiting. Furthermore, if there is no information on if there are waves in a location or not, but it looks from the nautical charts and swell maps that a region might hold even the smallest potential for waves, surfers will go. From the frozen arctic waters to the doldrums of the tropics, surfers are out there looking for waves. Well some surfers are, others are quite content to book a week at a resort in Fiji or Bali and think that browsing the carvings in the hotel gift store constitutes a genuine ‘local’ experience.

A lot of people that surf want to have a taste of the pioneering days; To come around a headland, expecting nothing and finding a new wave, to have it to yourself, to soak it up, to name the break, to own the story. Most people have that dream. But their reality is somewhat different. While most people will tell you that’s what they want to do, they really don’t. It’s kind of like a sexual fantasy, that if lived out may just cause more problems than the fantasy was worth. But then there are the real explorers, those who will push into a new area, take a punt, go around the next headland just to see what’s there and if the elements align, they will strike what they are looking for. The captain and crew of the PNG Explorer are those people. They have spent years going where other people wont; running a charter business where other people say it is too hard. Working with the locals and the local politics that most businessmen would run a mile from.

The rewards, well, the rewards are incredible. They take their guests to some of the most amazing surfing destinations in the world. And they do it from one of the greatest floating toy-boxes I have ever had the privilege of going to sea on, the PNG Explorer. They could have set up their charter business anywhere in the world and easily competed with other operators for clients. But Captain Rigby spent years in PNG as a young sailor and saw the potential for running surf charters throughout the region, so he went for it, followed his dream and now has the most incredible lifestyle business, hunting waves with no one else around. I have returned to PNG many times to photograph, and every time it has been incredible, so when I heard the boat was going to Manus, I locked in my spot.

Whilst this was not the first time they had taken the Explorer to Manus it still had the feel of an exploratory trip. The swell, winds and tides can throw a lot of curve balls at you in PNG so you never know when a reef may go from lying dormant to rising into a proper ‘stand-up-barrel’ kind of wave. For the first part of this trip, however, we did not get a lot of swell. What we did get was the sheer natural beauty of the islands. It’s easy to forget about the surf when you are floating in gin clear 30+ degree water. The islands are so incredibly beautiful and the water so amazingly clear that it redefined my perspective on what a tropical ‘paradise’ really is. What we lacked in swell during the first half of the trip was more than made up for in the second half, I’ll let the photographs do the talking for just how good the surf in PNG can be. Barrels like this really can’t be described in words.

Unless you are completely detached from the flow of news and information in Australia, you have heard of the Immigration Processing Center on Manus Island that the Australian government has funded to establish a way of ensuring that no person seeking to enter Australia ‘illegally’ will ever make it into the country. To debate the policy of the Australian government or the will of their constituents is not what I am here to do, there are more than enough journalists and writers on all sides of the immigration debate that can better argue both sides of the issue than I can.

Before I left for this trip I mentioned to a few people that I was heading to Manus, I might have even posted something on Facebook or Twitter. Quite quickly I was hit with several emails from people wanting information on what I was going to do there, questioning whether it is safe, will I try and visit the Processing Centre etc. The day before I left there was even a protest in my hometown of Manly calling for a change in the policy of detainment.

As it turns out I did end up going to the facility. In fact we anchored for a few nights just off the naval base that has been extended to accommodate the facility and were invited into the ‘wet mess’ (workers bar) for drinks that night. I am sure there are journalists and human rights activists that have been doing their utmost to gain access to the facility without success. All we did was show up with a bunch of surfers, say hello and we were invited in. I was however requested to not take any photographs, a request with which I complied. After all I was not there to ‘kick the hornets nest’.

What struck me more than anything was the sheer volume of construction work going on there. What was, only twelve months prior, a collection of World War II buildings and a small naval outpost of the PNG government was turning into a city of workers and ‘donga’ shed accommodation to house them. Talking to some of the people who worked there was interesting. The Australians I conversed with were not allowed off the base without being granted special permission. They were being paid ‘danger money’ on top of their salaries and living a life totally separated from the town of Lorengau where the facility is located. This may not be the case for everyone who works there, but was for the people I met.

Given that, earlier in the day, we had absolutely no problems walking through the town, going to the markets and generally hanging out in Lorengau, the danger money received by the workers seemed a little over the top. Yet, I am not an expert on such things, merely a photographer that likes to surf and will travel to any remote destination where there is a possibility of a wave!

Essentially what I am saying is that the people who I spoke to that worked there had a very, very narrow perspective on what Manus was really like. They’re shut out from the rest of the islands, the perfect beaches, the amazing water, the surf, the diving and the giggling children of the villages. Like the Lonely Planet guidebook and the Australian media, they seem to have missed the point about Manus. The place is incredibly beautiful. Yet it’s the limited perspective of most people who look at a General MacArthur era naval base, that the Australian government is funding into an offshore immigration-processing center (which only takes up a tiny part of one island in an entire province), that has captivated the worlds attention. Of course it is understandable that controversial politics will gain the media’s attention, but not visiting Manus Island Province because of the detention centre is like refusing to visit Sydney because there is a prison at Long Bay.

I can only hope that there are more people in the world like Captain Rigby of the Explorer, people willing to show how amazing this place really is, people willing to take others there, to let them surf the waves, dive the reefs, get the fine white sand between their toes and the tropical sun on their shoulders, to drink straight from the freshly cut coconuts and dive into the crystal blue water and maybe, just maybe peoples perspective will start to change. PNG is closer to Australia than any other country, it has, in my opinion, some of the best adventure tourism in the world, yet visitor numbers remain very low. I spoke with a political / tourism representative about this in a Port Moresby hotel on my way out of the country and he said that PNG is not trying to become the next Bali, they don’t want mass tourism. What they are looking for are people who want to explore, to see something new, to go where others don’t and most of all they want the local population, the villages and towns to take ownership of these small, community driven tourist enterprises and show people what PNG really has to offer.